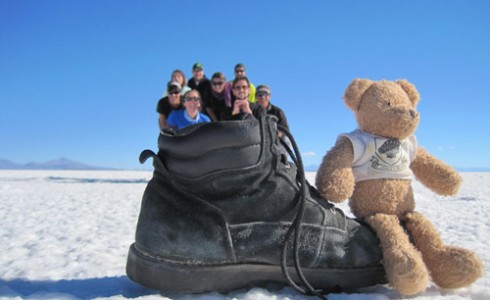 As determined as I am to visit as many countries as possible I decided if we move quick enough we would have chance to visit Bolivia before we started our last project in Cuzco, Peru. After a tiring journey from Peru to La Paz.

In Bolivia the last thing we needed was an out-of-tune marching band clattering their way down the street outside our window but unfortunately that’s exactly what we got. Just to add to the ‘music’, during their brief intermissions, a slow constant baseline could be heard from the several nearby clubs. So far Bolivia had pissed us both off! We were freezing cold, couldn’t breathe due to the altitude, couldn’t sleep and were unimpressed by the busy dirty streets of La Paz. There was only one reason we were here and that was to catch a bus to Uyuni to visit the largest salt flats in the world.

The overnight bus to Uyuni takes 12 hours. 12 long, rickety bumpy hours. It was the bumpiest bus journey I have ever been on, I nearly bit my tongue off! No one got any sleep and at 5 am the bus mysteriously stopped. Assuming it was just another stop to let locals on (to sleep in the aisles, as you do). I tried to catch a few winks whilst the bus was still. Little did we know we had actually arrived at our destination but the bus driver had locked us in as it was too dangerous to walk around at this time. He didn’t tell anyone this until 7am when he unlocked the doors so everyone was a little confused and freaked out!

We had pre-booked a hostel after our previous disasters with finding a room. We couldn’t check in until 1pm so had to fill 6 hours. We met up with a bunch of other tourists and wandered around the small town like unwashed/unslept zombies and eventually booked a tour of the famous salt flats. The rest of the day was dedicated to napping and eating. The next morning we arrived at the travel agency ready to go. We were informed that even though we booked a tour for 5 people we would now be a group of 7. We were annoyed as the jeep would be very squashed and weren’t given any money back. As we complained the woman went completely of the handle and tried to blame us and even tried to remove Ben and I of the tour as we were ‘making trouble’ by complaining! We had no choice and had to board the cramped jeep. We left with a bad taste in our mouth but it turned out we had so much fun with this group that it didn’t matter we were a little cramped.

As the first 80’s rock anthemn played in Figo’s (our driver) car we knew it was going to be a fun tour.  As compact as we were it seemed like we were the party jeep, playing loud music and basically behaving like children. Our first stop was a train graveyard. It was a very surreal place where old British mining trains lay rusting and wasting away in the desolate yet beautiful desert.

“Hold on’ Someone’s nicked me engine!” 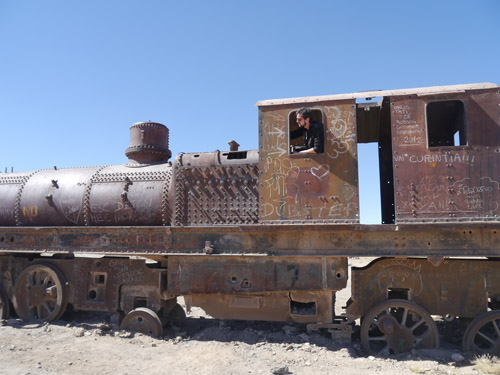 I wish British Rail was this comfy

Later on, we made it to the heart of the stunning salt flats where we saw how the locals carefully piled the salt up into mounds to dry out before later returning and collecting,  after all the tourists had clambered all over them to take photos of course.

Just need a bag of fish and chips

Patterns in the salt

Our next stop was fish island, an island in the middle of the salt flats covered in ancient cacti. It was really surreal climbing it, thousands of years ago, this island would have been a coral reef deep beneath the ocean.

In front of Fish Island

After a delicious lunch we took some obligatory perspective altering salt flat photos. These were great fun and Figo, being the legend that he was, drove us to another area with no tourists to take some more shots while the other groups waited back at the hostel. He even gave us a dinosaur to play with. Best group ever! 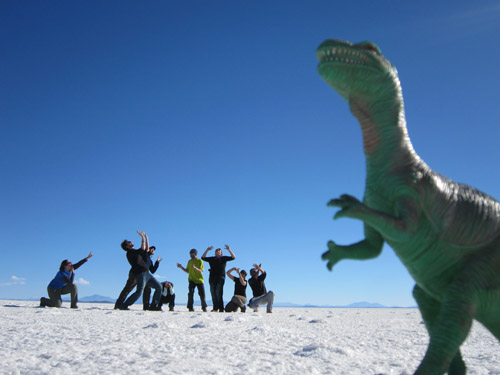 Who said Ben’s got big feet?

There was a man who lived in a shoe 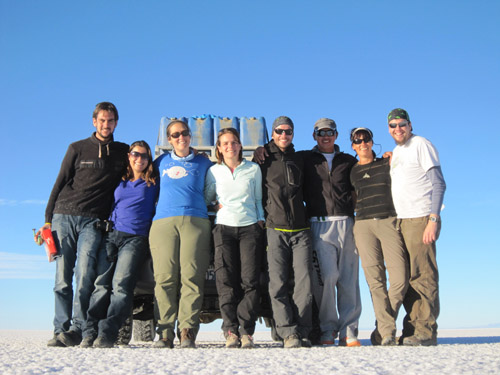 The hostel was completely made out of salt, even the floor.  It was pretty cool although it meant everything you owned now had a light dusting of the white stuff, good luck trying to to get through customs after a day on the salt flats! Apparently salt’s not a great insulator, and the first night certainly wasn’t the warmest… though we were yet to find out that it could be much much worse. 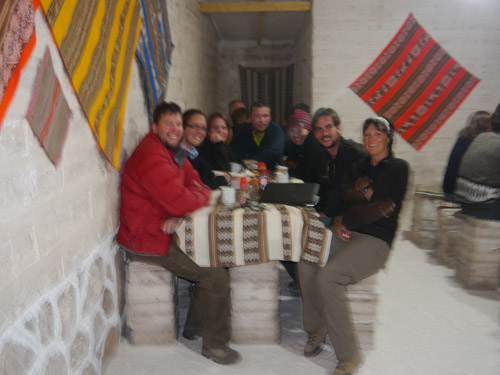 Dinner Time in the Salt Hotel

The next day the party jeep (now armed with an exciting playlist of 132 classic tunes) headed to some beautiful lakes. The water was so crystal clear that you could see the reflection of the volcanoes and mountains.  Here a bunch of surprisingly smelly flamingos provided us with some excellent photo opportunities.  It was here we found out Figo’s nickname amongst the other drivers was ‘El Flamenco’ (The Flamingo), which we did not use to make fun of him at every opportunity  😉

Flags in the Salt Flats

We were warned that our next hostel was very basic, and it was.  It was freezing cold and we longed for the now mild temperatures of the salt hostel we had stayed in the night before but we were prepared and a rather violent game of cards we all went to bed in all our clothes, hat, scarf, gloves and cocooned ourselves in our sleeping bags.  The next morning we were woken up by a 5:40am alarm and the coughing and spluttering of a sickly member of our party.  We had to be on the road early as it was a long way back to Uyuni.  Our first stop this morning was the Sulfur Gizas.  These were amazing shafts of bellowing stream rising out if the earth’s crust, imagine the film Total Recall, where they release the atmosphere with the alien device at the end of the film – it looked just like that – except without the eyes being sucked out of the sockets part.  We were allowed to walk right up to them and peer into the bubbly crevasses – sometimes absolutely no health and safety rules are a great thing.

Total Recall eat your heart out 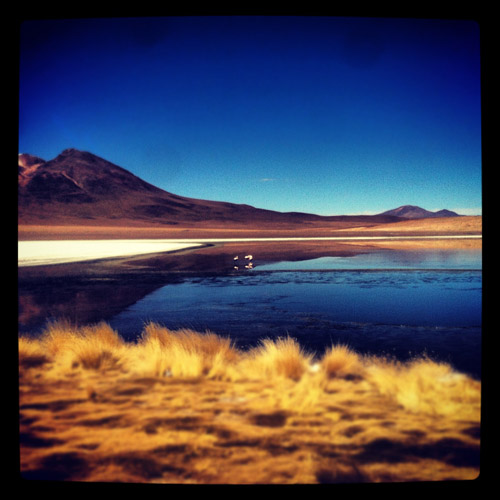 A volcano in Bolivia

Our next stop was a wonderful warm water pool.  All of us were a little reluctant to strip off in the freezing temperatures but we were rewarded with a glorious warm bath, which for many on the tour turned out to be their first wash of the 3 day tour…mmmmmmm.
On the way back to Uyuni we stopped of at some volcanic rock formations which Ben and I had great fun climbing in and around.

The gang of us

It was truly a trip of great highs and lows, 5000 ft in the air but with temperatures much lower than your average brit is able to tolerate.