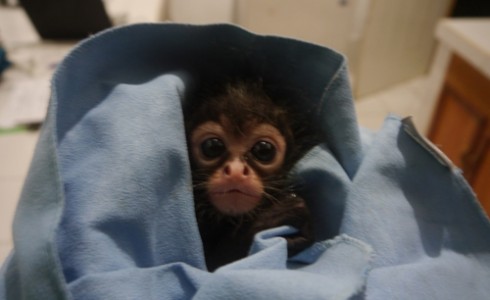 So whilst everyone else was getting squawked at by angry parrots, or getting their brooms stolen by crazed Spider Monkeys, Tamara was busy tending to one of the youngest residents at the Arcas Wildlife Rescue centre.

It was only a week or so after we had arrived, that Alejandro, the captain at Arcas, held Tam back with a pretty serious look on his face, I’m sure she won’t mind me saying that she looked pretty panicked. In true Tam style, she immediately assumed she was in some kind of trouble, perhaps he knew about the dead parrot she had hidden in the freezer? Or maybe he had found the stash of Vodka she had hidden in the Snapping Turtle’s pond.

You all know where this is going, but a man’s got to pad a blog post out. I was pretty sure that Alejandro’s private meeting with Tam was about the baby monkey – though had i known him as well then as i do now i might not have been so confident about that.. but sure enough – he held her back to give her the honor of caring for the resident baby spider monkey. The most sort after job on Arcas, and a role that was to make Tamara the envy of all the other volunteers – even me. Joking aside, this really was a great thing to be asked, and Tam was delighted, as I’m sure you can imagine. Anyone that knows her only need imagine her reaction to “Will you take care of this tiny cute baby monkey? Will you feed and care for him and teach him to climb?”

She did a great job of course, she had additional shifts (the downside of the job) – which meant she had to head down in the evenings in the dark to feed her new baby. She almost had to sacrafice thursday night drinks because of it.. but fortunately she managed to persuade one of the workers to feed little baby monkey so that mummy could go out and get drunk. I have a sneaking suspicion that Tam will be arranging another trip back to Arcas, Guatemala in 5 years time – to see baby monkey’s release into the wild. Good Luck Baby Monkey!!

PLEASE NOTE: This monkey came into ARCAS care on the 29th of february at 549g, the 4th of may the day of the filming he was 655g, and right now he is 688g and eats by himself. The process of rehabilitation of spider monkeys includes hand feeding and introduction of tastes and textures for several weeks or months. He was fed with a syringe adapted with a bottle nipple for a few weeks, and then introduced to solid food (what is shown in the video), and now has grown into feeding by himself, this will lead to growth and strengthening before he can be introduced to more monkeys in a near future to form a troop and develop into a candidate for release within a healthy group. Due to their physiology juvenile spider monkeys bulge a lot after feeding and will have an almost empty digestive system within 2 or 3 hours. 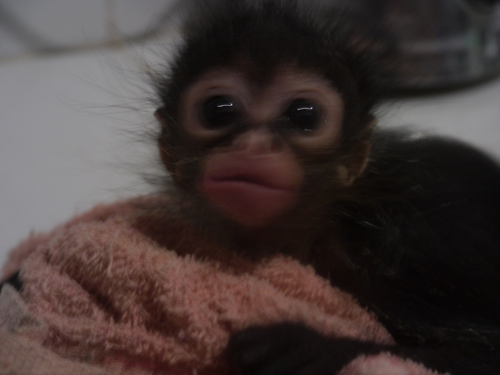 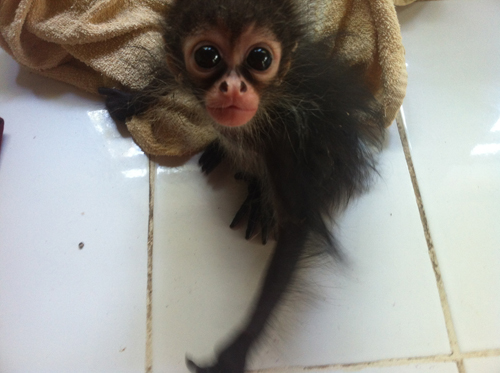 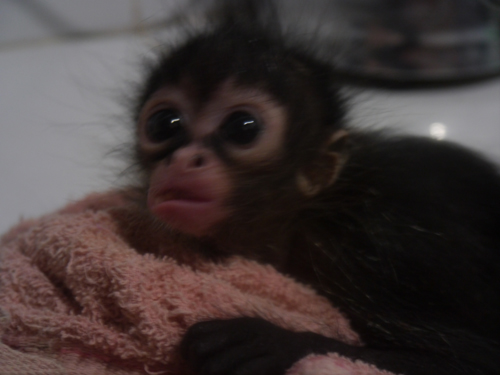 Trying to chew some Banana 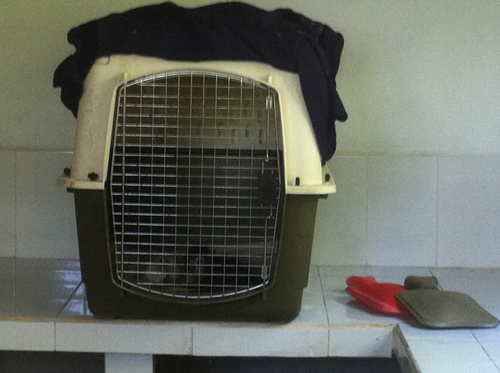 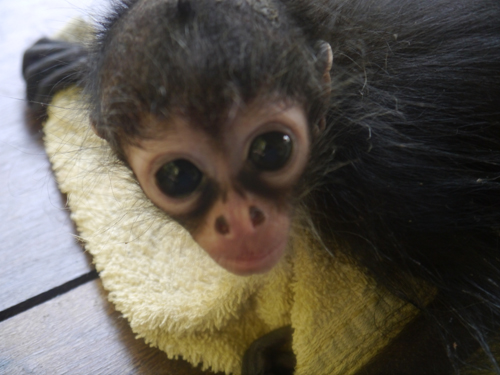