← The City That Never Sleeps & The Boardwalk Empire
Clapping in Chichen Itza and Sinking in Cuzama! →

One Bag in Paris & Two Idiots in Mexico

After our epic adventure across America, we took a few days to regroup back in England. Catching up with friends and family, and to swap out the clothes we had been wearing for the last six months – choosing from the same 5 T-Shirts each day become tedious after a while.

It was a fleeting visit back home. Our year long round the world travel insurance policy became null and void if we spent more than 10 days back in England, so it felt like no time at all until we were back on a plane, flying out of London Heathrow – like we had done just 6 months previously. It wasn’t South Africa we were to fly to this time though, it was Mexico. The plan? we were to go to Merida, to volunteer with children.

The journey to Mexico was not without incident. At London a particularly snooty air steward informed us, that we wouldn’t be able to sit together for part of the journey(even though we booked our tickets a year ago). To complicate matters further, our trip to Mexico involved changing planes in Paris (don’t ask me why). Luckily we got off to a flying start, so we didn’t have to sweat too much to make our connecting flight in Paris, a bit of a jog but nothing to stressful. Unfortunately, my bag was not keeping quite such a timely schedule, and being the independent, happy go lucky kind of bag it is, it took a few days out to see the sites of Paris.

We reached Mexico some time in the evening, and headed into baggage claim. We waited. Then we waited. We waited. Then just for a little change of pace, we waited some more. Some time later, a Mexican airport worker stuck his head through the little magic doorway (the one where conveyor belt brings through the bags) and said something in Spanish, we gathered enough from his hand gestures that there were no more bags coming through that little magic doorway today. A short while later, a sleepy looking Mexican man came sauntering over to the crowd of people all looking pretty none-plussed out about the closing of the magic doorway, and pointed us all to a little counter at the back of the room. It seemed this was pretty standard practice hear in Mexico. He wasn’t in the least bit surprised to see so many people all standing sans-bag.

The cock-up meant we missed our bus to Merida, which was another 4 hours away, meaning we had to get a separate bus into the local town and then onto Merida. At some point we also needed to contact the project co-oridinator in Merida that we were on our way. We had previously arranged everything at home.. I say we, I mean Tam. So the co-ordinator was already expecting us, but just to give two stressed out travellers more to deal with, they needed to be contacted again on arrival in Mexico. We found some free internet, and Tam sent the co-ordinator in Merida our arrival time, the co-ordinator replied with further details, we confirmed and then hopped on the bus. The beautiful beautiful bus. So much space, so much AC. It was a small consolation prize for the loss of my bag, but at least we were going to be comfortable for the next few hours.

We arrived in Merida at 1am, it was clear almost immediately that this was not a rich country. The roads were broken, the houses were broken, abandoned or falling down. There were stray dogs everywhere. But there was a certain charm about it that we realised later on. To arrive there at 1 O’Clock in the moring was a massive culture shock, and we couldn’t shake how unsafe it felt. We got off the bus, and realised it had taken us to the wrong bus station – we borrowed a Mexican guys phone to text our co-ordinator, emailed her once more, then hopped in a taxi to the right bus station. We got there just in time to see it close. Our project co-ordinator was nowhere in site. No one was anywhere in site. Just dark, run down streets, no friendly looking public places. So there we were, 2 idiots abroad walking around Mexico at 1am lost and confused and very hot. We sat down on the curb outside the bus station, one bag between us. Having been traveling for almost 24 hours, no showers. No method of contacting the co-ordinator. We were beaten.

We managed to hook onto a bit of wifi, and Skyped the co-ordinator. No answer. We Skyped all the numbers we had. No answers. We waited. As we grew more and more stressed, we kept trying the numbers in vein, until finally, one of them was picked up. The girl on the end of the phone told us she would try and contact the co-ordinator and then hung up. We heard nothing more for another 30 minutes or so, when finally, about 2.30am, a little car came round the corner, and a little Mexican lady hopped out. “Sorry, sorry, we thought you arrive tomorrow, sorry Ben and Tamara!!”.

I had so much we could have said to this woman, but we were so happy to see someone turn up, and know that we weren’t going to spend a night on the street with all of Tams stuff, that we just accepted her apology, let her completely off the hook and got into her car and she drove us to the shed we were to be staying in for the duration of the project, where yet another sleeply looking Mexican man was holding some bed sheets waiting for us.

This is the sleepy Mexican

Yes, shed! No locks, there was a gaping hole in the wall with wooden flaps attached to it that didn’t shut – I think this was intended to be the window. There were cobwebs in the shower, and we had an en-suite garage – full of dust, spiders and rubbish. Tell me why we’re doing this again? The next day we discovered our shed was part of a much bigger house – with rooms of varying comfort, ours being the shit hole, and the girl at the other end of the house living it up in air conditioned bliss. We found that there was anther much cleaner room in the centre of the house (literally in the centre – none of the walls in this room faced the outside – as such there were no windows – so essentially it was about 3 degrees hotter than any other room in the house – and of course, the fan didn’t work. We opted to move out of the shed, and into the oven. We stayed in that room for the rest of the time we spent in Merida. It got hotter and hotter. It also turned out to be the perfect breeding ground for mosquitos; I killed 12 in about 30 minutes. It was too hot to fight them. At night we just lay there, stuck to the beds with sweat – a steamed feast for the mosquito’s.

It turned out there were a few different projects that we could work at, we opted for the Kindergarten, which had an early finish meaning we could go hit a slightly smelly little bar with great character. Tam worked with the babies, I worked with the toddlers. It was definitely a Tam project, but I quite enjoyed it, I even got myself a little girlfriend (she was 3). Some of the days at the kindergarten were more productive than others, one day a lady came in and said to us in broken English – teach them colours in English. Then walked out. So we had a room with 10 3 year old Spanish speaking children, and had to try to teach them the colours in English. We soon realised, that the children didn’t actually know the colours in Spanish, let alone in English. That was an interesting day.

Tamara in her element!

We had a blast exploring Merida. It wasn’t until we had really wondered around, that we got a real sense for how appearances can be so deceptive. It wasn’t nearly as abandoned as it had seemed at first. Every two or three houses, would be a house-store; they had the front door open and some magazine racks on the walls – little shops. Or garages, or bars. This seemingly abandoned place was absolutely buzzing with activity. Hundreds of little shops, cafes and bars. It was amazing, and the buildings are all painted with fading yet vibrant colours. 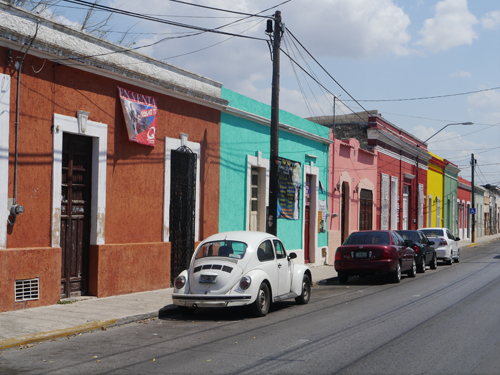 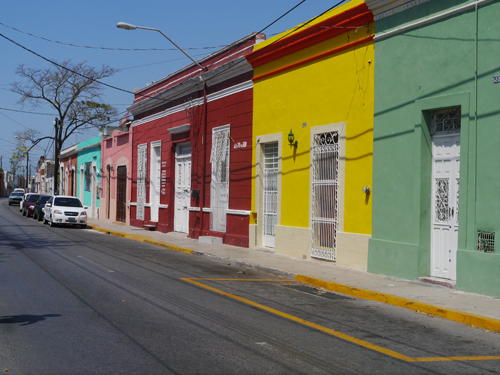 Fantastic colours on the houses around the city 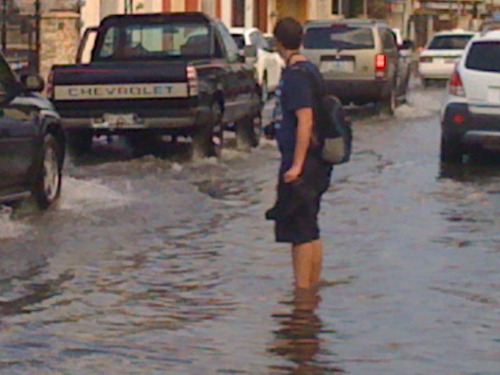 I had to ditch my shoes to cross the street after a storm! 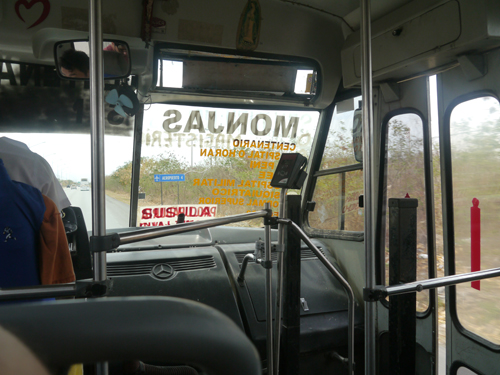 The death-trap we rode to work each day

Tam and another Volunteer hanging out by the pool in the volunteers house.

The local people were lovely too, not many spoke English but we got by. We realised just how safe it really was, truth is that had we slept on the streets on that first night we probably would have been fine. The circumstances had meant we misjudged it completely. We really grew to love Merida.

The other volunteers in Merida were awesome too, after our South African tour we weren’t sure what to expect, we met some cool people in South Africa but we met some real muppets as well, that just wasn’t the case this time around. We both loved everyone, and can’t wait to meet up again. Fortunately for us, the majority of the other volunteers were from the UK, so we’ll be able to hook up some reunions! It’s safe to say we hit up the town in Merida good and proper, and even managed to bag ourselves a Mexican guy named Georg, who showed us around and helped us order the Tequila!

George. Could he be any more Mexican?

He really was always holding some Tequila… 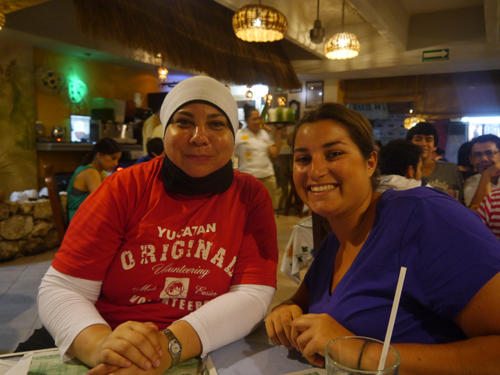 Tam & Fayette getting ready for some good Mexican food!

Julianne trying to blend in

Partying in the back of the car.

All the volunteers in Merida put their prints on the wall!

I really didn’t think this through…

Tam getting her prints on the wall 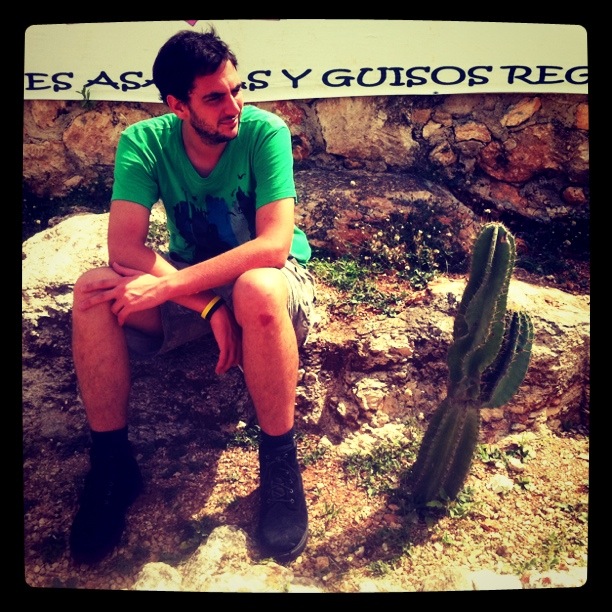 ← The City That Never Sleeps & The Boardwalk Empire
Clapping in Chichen Itza and Sinking in Cuzama! →