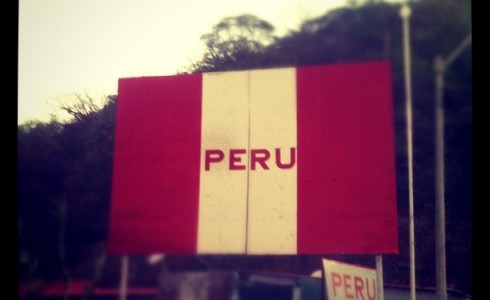 As we made our way down the coast of Peru we decided to treat ourselves to a hotel on the beach in the breezy seaside town of Trujillo.  Having spent the last week (or what felt like the last month) on buses, we figured we were deserving of a little luxury. The taxi driver was to take us to a hostel that I had researched beforehand, one which apparently was more difficult to find than Trip Advisor would have you believe. We were able to give the rather bewildered Peruvian cab driver little more than a screenshot of the hostel taken from the Trip Advisor website, and when he began asking us directions in Spanish, we were probably less than helpful. Still, our determined cabbie was not to be beaten, jumping out of the car to ask people on the street for directions, radioing in to base to get them to get the maps out (I don’t think we’re talking Google Maps here either). Eventually to ours and I think His suprise, he found the place (after driving 100 meters down the pavement that is), and he dropped us off at the front door. Nice Work!

Polite as he was, he elected to wait as we carried our bags into the rather posh looking Hostel… which turned out not to be a Hostel at all, but infact a 5 star luxury hotel. As we walked up the steps to the front door, it couldn’t have been more obvious to us that this palace was way out of our budget.. but how could we turn back after all our little soldier of a cab driver had gone through to get us here… So reluctantly, we entered.

Eventually the cab driver did leave, his car looking spick and span, polished to perfection. The hotel clerk I think by this point had realised we had no intention of staying, to be honest he probably knew from the moment we walked through the door.. 5 months traveling through South America on chicken buses doesn’t exactly do wonders for your self presentation. We asked the accommodating clerk if there was anywhere a little more economic and he gladly advised us of a couple of places a few hundred meters up and along the beach.

We hiked up our bags and began walking, only to hear a beep 5 minutes later.. we looked around, and there he was – sailing past was our cab driver waving out of his window with a look of complete amusement at the fact we were now walking back up the road with our bags on our backs to the first hostel he had driven us too when we first got into Trujillo. Yep, we really fooled everyone.

We found a lovely hostel/hotel eventually which was more in our price range. We had a beautiful view of the sea from our private balcony, a lovely, if a little chilly, swimming pool and we even had our own bath (Ben got a little upset as we checked out as he had forgotten to have one). We relaxed for a few days, sunbathing, walking along the beach and drinking cocktails. 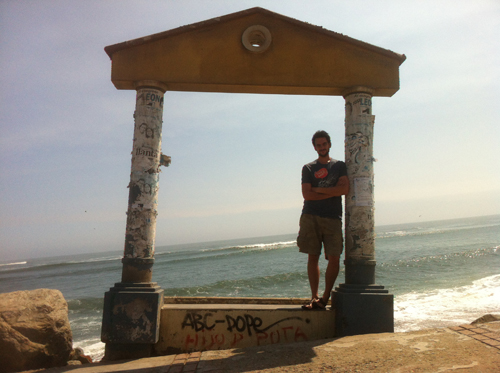 Ben on the Beach in Trujillo

We didn’t want to leave but another long bus was calling. We were off to Lima on possibly the most amazing bus I’ve ever been on. We’re talking hot meals served seat-side (or should I make that “reclining sofa-side”),  tea, popcorn and cake. I know it seems like we’re getting over excited here, but in South America, it really is the little things, and when it comes to buses, we’ve been on some hell rides. It was great to have a little luxury. It got to the point where we didn’t want to leave the Bus. I mean seriously, hot food is delivered to your seat, drinks and snacks are frequent, at any time you can just push a button and recline into a blissful slumber. Instead, what was waiting for us at the end of the bus journey? A bunch of scammers trying to hurry us into their less than comfortable hostels, taxi drivers fighting over who got to take the fare, the cold bitter early morning air, heavy heavy bags, all this amounting to at least an hour and a half’s worth of stress. Yes, it’s fair to say we would have happily spent a week on that bus.

Dinner time on the best bus ever!

All good things must come to an end unfortunately, and getting off the bus was every bit as painful as we had anticipated, unbeknown to us we had chosen the weekend of Peruvian Independence to stay in the country’s capital city, Lima. Exciting you might think? No, not really, the only major difference was the rates for rooms had doubled and everywhere was fully booked. We hopped into one of the fighting cabbie’s taxis and he started driving us from hostel to hostel, we gave him  the names of two or three which he repeatedly ignored, opting instead to drive us around the city to a bunch of hostels he thought would have rooms. As we sat there, thinking back to just a few hours before, where we had been so happy on our wonderful bus, he turned a corner and found a place colorfully known as “The Red Physco Llama” and luckily for us, they had rooms (expensive rooms!). We took the hit, and checked in for two nights. On the second, we decided to have a fat night so we went out to get pizza and wings to bring back to the room. The receptionist causally asked “What time were you planning to leave? Because your room is booked for tonight”. This was 7pm.  Ben calmly articulated our concerns (for one being on the streets, and two being that it clearly said in the book that we weren’t checking out until the next day!), I on the other hand struggled to contain my anger, and started throwing all the tools from the backpackers utility belt at her – threatened to tell trip advisor, bursting into tears. In otherwords I went a bit mental (those of you who know me can probably imagine the scene).  Nothing could be done so we sulkily retreated back to our room to pack our things. No Pizza tonight 🙁

5 minutes later there was a quiet knock at the door.  I opened it to the woman I had just pitched my hissy fit at and she informed us that we could stay and they would figure something out.  I was more than a little embarrassed but it just goes to show a few tears will get you anywhere 😉

Our next destination was a village called Ica.  It was a beautiful place next to a lake and surrounded by enormous sand dunes.  We had real difficulty finding a place to stay again due to the Peruvian Independence festivities.  Everywhere was either booked up or triple the normal place.  We eventually found a room above a bar (sweet!) and, as we weren’t going to get any sleep, decided to go clubbing (if you can’t beat them join them and all that).  We met another English couple who were as stylish as us, so dressed in lama jumpers, hiking boots and trousers that zip of into 3 sections we entered the club (we’re sexy and we know it!).

Sexy and we know it

The next morning (with bad heads) we were off to do our sand buggy and boarding tour.  The buggy had 12 seats and one rev of its engine would set off all the car alarms in the street.  Ben and I were slightly concerned when a quiet an elderly Peruvian man struggled to get out of the buggy and introduced himself as the driver.  This wasn’t going to be the mad adrenaline-pumping ride we were hoping for, this concern grew when the 6 year old girl got in the same buggy.  How wrong we were.  The driver turned out to be an absolute legend, and floored it all the way up the first steep sand dune.  He went at lightning speed, racing up, over and down the dunes despite the screaming girl in the back.  At some of the steepest dunes he stopped at the top and let us slide down on sand boards.  Ben stood up all the way (like a boss) and I opted to slide down on my belly as this was the position I was going to end up in anyway.

Ben on the Sand Beast

Hanging out in the Desert 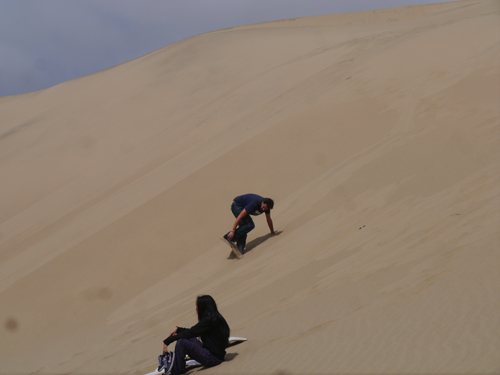 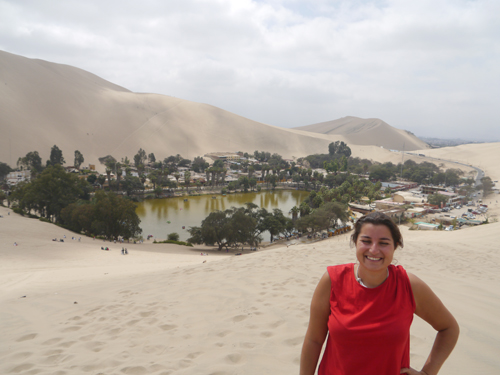 Just to put it in perspective 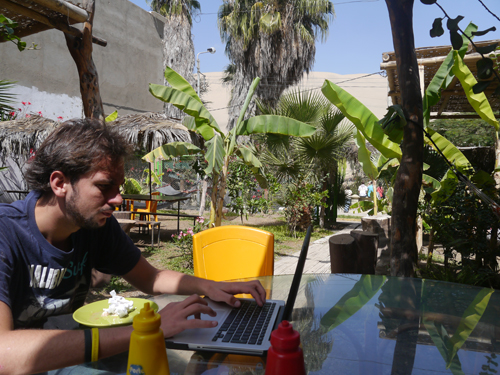 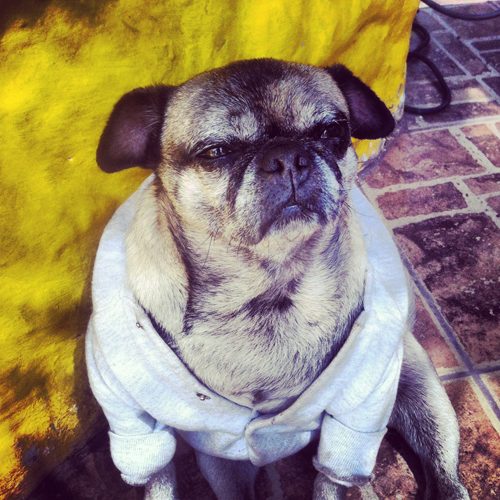 Dog in a coat. ‘Nuff said

After lunch (and showering sand from all sorts of places) we caught a bus to a town called Nazca.  This town is famous for huge mysterious line drawings in the desert, discovered recently but dated back as early as 2000 BC.  They also featured in the latest Indiana Jones movie which I insisted we watched again as soon as we could (it’s still as bad as I remembered).  We booked onto a tour to see the huge drawings in the sand.  They were pretty amazing.  We visited the house of the German woman who discovered them.  She dedicated her entire life to discovering their meanings and died at the ripe old age of 95 in 1998 (she never had a boyfriend, bless her).  In the evening we visited a planetarium to learn more about these lines and the correlation to the stars.  We also got to look at the moon through a telescope which had nothing to do with the Nazca lines but was pretty cool.

That evening we took a bus to a city called Arequipa.  Here we had the most amazing meal ever…beef fondue that you could cook yourself at the table.  We couldn’t afford the wine in the restaurant so went to a supermarket, bought a bottle and sat on the roof of hostel to drink it in the moon light… bliss!

After a few days of not going to museums and churches we headed to a place called Puno.  Here we visited the largest high altitude lake in the world and I got my picture taken with a sailor.   It was a good day!

“Because we’re worth it“

Tam and a rather ‘Russian-looking’ sailor

From here we booked on to a bus to take us to Bolivia.  After checking with 3 different tourists agencies that it was only one bus all the way there, we discovered that it was actually 2 buses and a boat, and one of the buses we had to scramble to get seats.  Lesson learned: all Peruvian tour operators lie….consistently.  Being seasoned travelers and let’s not forget, British, we slid our way to the front and managed to get the last two seats. No one messes with two brits abroad.