← Visiting a Black Man in a White House!
The City That Never Sleeps & The Boardwalk Empire →

Niagara Falls in the Rain, Toronto in the Snow and Boston in the Pub. Cheers! 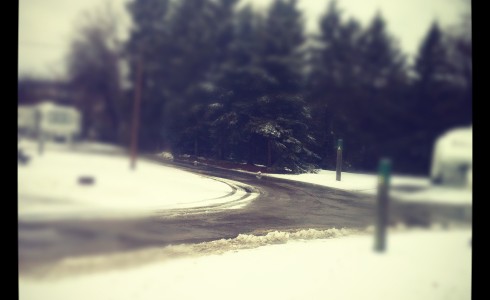 Picking up from where we left of in Washington DC, (the nightmare driving, parking, being shouted at by police fiasco) we legged it out of the Smithsonian Museum of Natural History and followed the SatNav back to the RV (yep, at this point we had taken to marking the location at which we left the RV on the SatNav then taking it with us so when we inevitably got lost we could find our way back).

We made it just in time, though after that days events we were fully expecting to find it had been clamped, or towed… it seems things were starting to go our way, when we got back to it, all was well.

We got on the road, this time heading for Niagara Falls, NY.

Something i haven’t mentioned before now, is that whilst most of our trip across America was planned and executed with exact precision and timing, we had sort of left things open from North Carolina onwards. After North Carolina, we were either to go south, down to Florida, then back up through Washington DC and into New York, or we were to go North, through DC and up to Niagara Falls and into Canada. As you’ve no doubt guessed we opted for the latter, the idea of being able to tick of another country on the Facebook “how many countries have you been to?” app being all to tempting. I wouldn’t say this decision was a mistake, but I’ve no doubt in my mind that it wouldn’t have been nearly as testing had we gone south. In hindsight, rather than just being excited about the prospect of visiting another country, maybe we should have done some actual “research” into where we were going and what it was like in the middle of winter… to quote myself from a previous blog post.. 2idiotsabroad.com!

Anyway, we were going North, through Pennsylvania and into the State of New York, excited to visit the famous falls!

We arrived in Niagara at about 10pm that night, and decided to pull into an RV park about 10 miles from the falls, the Snow was heavy and thick underfoot – and there was no fresh water – all frozen up. We got into bed and fell asleep to the soothing sounds of Jack Bauer hunting down terrorists.

Next morning, we woke to a little less snow, but a miserable day, rainy and grey. We set off early and got to the falls in no time at all. We drove up over the bridge and into a barren car park. We were early, but not that early.. this was our first clue that going North might not have been our best corse of action. We drove passed a sign that said parking: $20.00.. (which made me sad 🙁 ) and then we drove passed the empty parking attendants booth (which made me happy :-)) – boom free parking!

We hopped out and walked over to the cafe, thinking we would grab a coffee to keep us warm while we walked around in the freezing cold and rain. Closed. Never mind, lets go over to the falls – which we could hear all around us. We followed the path which led to the edge, but before we could get close to the edge.. another sign. Closed. We walked over to the other side. Closed. Closed. Closed! Ok, so i’m painting a pretty drab picture, the truth is we were able to see Niagara Falls, but it was from a distance, and the walkways and paths which lead over them were closed. The weather made visibility difficult, and the freezing cold conditions meant our interest in sticking around was limited. I’m glad we went, but it’s one of those times where you have to say to yourself we’ll just have to come back. Can’t win em’ all.

The top of the falls

Ben with Niagara falls in the background

We left the falls laughing, it was hard not to see the funny side of driving 500 miles to see something that’s basically closed, and followed the road signs for “Canada”. Sat Nav lady must have been trying to get back into my good books because she literally pulled the maps for Canada out of her.. USB Port? We didn’t download or pay for maps of Canada, yet somehow she had them. We drove in, paid the toll and crossed the bridge into Canada. We pulled over at customs where a rather suspicious and incompetent (not a good combination) security officer questioned us. After tearing random items which had been stapled into my passport by American government officials and telling me that he suspected i might have been hiding out in the USA since 2005, he got into the RV and search it. Luckily, Tam had finished up all the crack the night before, so we had nothing to hide. He then nonchalantly strolled out of the RV and back inside his office. 10 minutes later, a new security guy came out, thanked us, handed me back the pieces the first guy had torn out of my passport and sent us on our way. Trying to save face much? Jackass.

The little town of Niagara Falls on the Canadian side, was touristy as hell, alot like Pigeons Forge (mentioned in an earlier post), just without the good weather. Also alot of it was closed, and it was very expensive. We wondered around a little, but had already had our fair share of over the top tourist novelties, so we had a coffee and a bite to eat and had a quick look around before heading off.

The perfect street to park the RV

We set off for our next stop, an RV park just outside of Toronto, Canada. We made pretty good time, arriving that afternoon. We ate some more of the Pizza we bought the week before, and had ourselves another cozy evening with Mr Bauer.

We awoke to a beautiful, crisp, snowy winter morning.

On the advice of a very helpful lady at the RV park, we drove to the outskirts of Toronto, CA and parked up at a shopping mall, then we got the Train in. We had a lovely day walking around the city. Neither of us found it to be an amazing place, but it was nice and we got some awesome sushi. 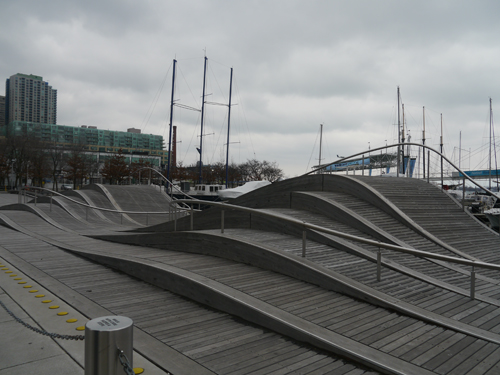 Cool architecture along the Toronto boardwalk

After leaving Toronto, we found another RV park and set up camp for the night, before heading off early the next day to visit Montreal, which is much much much further north than Toronto. And much much much more covered in snow to boot. We didn’t stay long, instead we ran for the border. Tired of the cold, tired of the snow, tired of everything being closed!

We got to the border and drove a couple more hours into the state of Vermont, where we found a pretty snow covered campsite to spend the night. Once again, we woke up to a beautiful morning.

Vermont Campsite in the Snow

Wondering through a forest in Vermont

We stayed at this campsite for a few days, cosy and warm in the RV, and enjoying a few days without moving anywhere. When we finally did decide to get on the road again, it was to a place that Tamara has dreamed of since she was born. Seriously, I don’t think I’ve ever seen her more excited than she was on the way to this place. Need a clue? She was like a kid in an Ice Cream store.

Figured it out yet? Where’s Tam?

Bingo, the Ben and Jerry’s factory!

The Ben and Jerry’s Bus

After leaving Vermont and the Ben and Jerry’s factory, it was time to visit Boston, and a place where everybody knows your name.

“Where everybody knows your name“

Tam outside Cheers in Boston

The view from the opening credits of Cheers!

Hangin’ out with Fraiser and Norm

Take a seat at the bar

← Visiting a Black Man in a White House!
The City That Never Sleeps & The Boardwalk Empire →