← Driving the Great Ocean Road & Visiting the Grampians National Park
A trip to Whitsundays and The Great Barrier Reef…why not!!? →

Surfers Paradise, Goldcoast & a lot of theme parks! (With Video!)

Our trip to Goldcoast was filled with lots and lots of screaming (mainly from Ben) as we decided we wanted to visit ALL the theme and water parks. First off we went to Movie World and were first in line for the Superman Escape roller coaster. This ride was ace! It races up at a 90 degree angel at an acceleration of 0 to 100 km/h in 2 seconds, positive g force of 4.2 and negative -1 which made us feel all floaty before we plummeted straight down (90 degrees again of course).

Next up the Lethal Weapon ride which Ben had assured me was really good as he had been on it 12 years previously. All I can say is that I don’t think they had done any matinence on it whatsoever in the last 12 years! It was the most painful roller coaster I’ve ever been on , continually bashing your head from side to side as you invert upside down and speed along the track. I was glad it was over and obviously all blame laid with Ben.
An unexpected brilliant ride was the scooby doo ride which we went on as a bit of a joke. It’s starts off as a really dull and quite lame ghost train and then stops suddenly,  the car rises up at an angel then suddenly goes backwards down a steep drop then spins around and continues racing around the track at ridiculous speeds around sharp bends. Needless to say Ben and I were squealing louder than the under 10’s in our car.

My personal highlight had to be the Movie World parade. Of course I had fought my way to the front, pushing kids in every direction. Totally worth it just to see 5 looney toon characters break out in dance with perfect formation and timing to LMFAO’s “everyday I’m shufflin”.  Seriously watch the video, I challenge you not to laugh uncontrollably and hysterically.

After a long day we got back to our ‘party’ hostel and were convinced by the 20 something staff to come on a night out lured by the prospect of free entry and drink to a club called “Cocktails and Dreams” ….nice.  We went along (in our backpacker attire-luckily we weren’t on the pull) and actually had an amazing night.  We even managed to scheme another free drink by simply going outside and coming back in again.  Our planned “one drink and lets go” night turned into an all nighter; filled with fist pumping and crazy dancing.

So the next day (hungover obviously) we decided to go to White water world- what better way to clear your head than being sprayed in the face with water as you speed down immense waterslides.  Amazing fun, and surprising how fast two adults can go down a waterslide compared to little kids. It’s  all about having a bit of weight behind you to keep up the good inertia.

Day 3 of our holiday within a holiday was Sea World.  Not a bad  start to the day when it opens with  a Sea Lion show called “The Amazing Fish Detectives”.  Yeah I know amazing right?!  Many of you know that I have a long standing aversion to a certain sea animal…..dolphins.  Probably stemming from a Simpsons episode which portrays them as scheming, evil and way too intelligent.  Anyhow we watched the dolphin show and I have to say I was very impressed.  Don’t worry though, I’m not about to go swimming with them or anything.  One step at a time and all that.

There are 2 rides at Seaworld.  Only one of them needs a mention here.  Imagine your are on a jet ski.  Cool enough.  Now imagine that jet ski is attached to a high speed roller coaster.  Yup, fun was had.

Can’t talk about Sea World without a mention of PENGUINS.  Yeah they were cool and I went crazy.  True story.

Our day ended with an impressive jet stunt extreme show where men with way too much adrenaline needs flipped jet skis 180 degrees over jumps and each other.  I’m sure their mothers are very proud of them.

Day 4 was Wet ‘N Wild day (crazy Australian punctuation).  Another water park with ridiculous rides.  For example, there was a ride called Kamikaze which is basically just a 11 metre vertical drop into a bowl.  The 2 person boat hangs of the edge as you get it (its a bit worrying when the ride staff have to wear a safety chord around themselves as they operate the ride….where is my harness?).  Guess who had to go backwards-yup that be me-doh!  50km/h feels pretty fast when you are traveling backwards and vertical in a blow up boat.  We went on it 3 times 😉 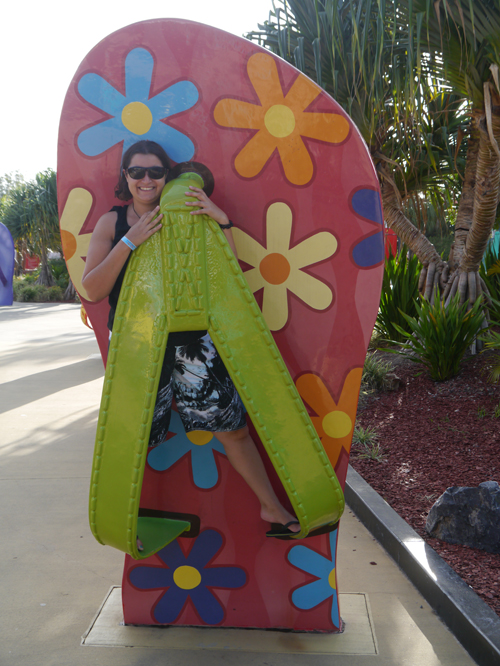 I think the ultimate scary ride award though has to go to Ben.  I swear the ride would not be legal in the UK.  Its called Aqualoop and to even get onto the ride you have to be a certain height and weight and wear a safety t shirt.  Then you have to step into a plastic coffin like case 100 feet up.  The floor below you drops and you shot down and loop near 180 degress and thank your lucky stars that you made it to the end.  I say this as I stood and watched the ride (I of course was never going on a ride that required me to weigh myself publicly) and 50% of the time people would not make the loop, travel backwards in the confined space and have to escape using the escape hatch.  What kind of ride would actually have that kind of unsucess rate?!  Good news though as Ben made the loop.  Must be all that good inertia!

We got convinced again to go out by the Duracell bunnies back at our hostel.   This time we stayed until the drinks weren’t free then headed home.  Classy we know.

We decided to have a rest day (as theme parks and water slides are hard work) and spent the day by the beach, trying not to get drowned by the massive waves.

We bought a bogey board (which got confiscated at tiger airlines) and had fun trying to catch a wave. The next morning we discovered that we both had cold’s which probably due to too much fun. Too much fun diesease resulted from all play and no work (and thinking we were 19 again). We decided to have another easy day on the beach as we were both feeling sorry for ourselves. We told the staff where to stick it when they tried to take us out on another party night that evening.

Day 7 was Dreamworld day and I have to say a bit of a low point to the whole holiday. Both of us forced ourselves to do something even though we were still quite sick. We left the hostel as it poured down with rain ( I of course was wearing flip flops) and very miserbly entered the theme park. I didn’t feel like going on anything (which was lucky for me as all the rides were closed due to extreme weather). We saw some tigers not doing tricks (probably because they were in the rain as well) and waited for a crocodile show that didn’t happen (“cos its a Wednesday, the shows only on Monday, Tuesday, Thursday, Friday, Saturday and Sunday” -obvioulsy). Then we ate our prepacked soggey sanwiches (as we are trying to save money) on a bench under a leaky roof as my wisdom tooth decides this would be the perfect moment to make a painful appearance. Oh and the bus was over an hour late.  Perfect. (Check out the sexy DreamWorld Ponchos)

The poor weather (aparently it does rain in Australia) forced us into a travel agents. We told them to take us away from the rain and they told us to enter our pin. A trip to WhitSundays and the great barrier reef…why not??!!

← Driving the Great Ocean Road & Visiting the Grampians National Park
A trip to Whitsundays and The Great Barrier Reef…why not!!? →