You better Belize it! 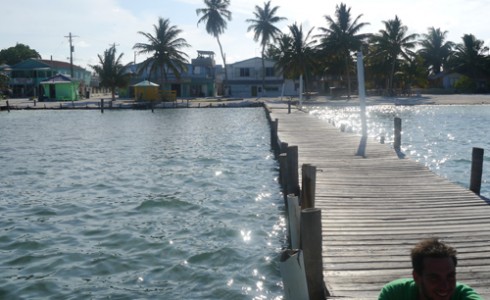 Belize is a place we had never originally planned to spend any time, we had already traveled through Belize on our way from Mexico to Guatemala, spending a total of 90 minutes there. It wasn’t until we met people in Guatemala that we realised that may have been an error. We met a group of Australians (and one Kiwi) who were volunteering at Arcas, they actually left at the end of our second week of volunteering, and we said a fond fairwell. Around the same time, Captain of the ship, Alejandro took leave to go to a conference, planning to be away for 10 days in total, leaving me and Tamara in charge. It wasn’t until Alejandro had left that we realised just how much he did.. needless to say, by the time he came back we were well ready for a break! We decided to leave a few days early to catch up with our new Ozzie friends, who were now somewhere in Belize, in a place neither me or Tam had ever heard of, Caye Caulker.

We took a few days out to visit a place called Semuc Champey in Guatemala, a whole other story and a whole other blog post which i’ve yet to write, but after our trip to Semuc, we hopped on a bus to Belize City, where we to get a connecting boat which would take us across the sea to the beautiful island cayes to meet up with Jimmy, Laura, Angela and J.

As we got off the boat, not knowing really what to expect we looked around for a main road, it soon became apparent that there were no cars on Caye Caulker, instead this was a tiny little carribean island haven, with 3 dirt roads which ran the length of the island in parallel, walkable from end to end in 10 minutes. The only vehicles on the island were Golf Carts and bicycles. Day and night these little golf buggies would race up and down the 3 dirt roads, and every 10 meters or so was a local with a barbeque serving up huge pieces of Barbeque chicken soaked in spicy Belize sauce, served with a generous portion of Rice and Beans. Simply awesome, food for the soul! At the tip of the island was a place called “The Split” – where quite literally a tornado had torn through the land causing a 30 meter split from one side of the island to the other which the sea now inhabited – the split had a perfectly positioned bar right on the tip, with tables and chairs pitched in the shallow crystal clear seawater, so you could grab a beer, and spend the day lazing around on what was left of the pier or paddling and swimming in the sea. Simply beautiful.

There were literally hundreds of coconuts in the palm trees on the island, thinking of inventive new methods of climbing the trees and even more inventive methods for cracking the coconuts became almost a daily occurrence, there is a nack to it, which we did eventually figure out, one thing i can say with absolute confidence, is that folding a beer bottle top in half and attempting to saw the coconut in half is not the most efficient method, nor is bashing it intently on every side from every direction on a rusty nail sticking out from the underneath of an old pier.

Another highlight; we rented out a jetski between the 6 of us, no doubt some of you saw Tam’s facebook updates around the time – something about dreams coming true if my memory serves me. Tam has been hinting at a jetski ride since our trip began, we almost rented one out in Fiji, but were put off by the cost. It was worth the wait, we had half a day with the Jetski and giant rubber tube, we had the entire north side of the island to ourselves, not another jetski in sight, we burned through an obscene amount of fuel, and took some pretty nasty high speed tumbles out of the ring, but luckily there were no serious injuries. The day was a complete success, with Tamara proving herself to be a natural Jetski driver, and a bit of a speed junkie, she scared the shit out of Angela and J when she took them out for a ride, but everyone was impressed with her cool demeanor and expert handling. Tamara took her new found love out for one last ride, we watched her speed of into the distance, cornering with cat like precision, she spun it round and headed back in towards us all for the final time. Slowing down with grace and control as she neared the pier, she had her self face on towards the pier with about 15 meters to go, she continued forward, at a steady pace, which was no longer decreasing. I watched her with interest, wondering how she was going to swing it right or left to pull up parallel with the pier for her final dismount, she continued forward. She continued forward, still looking cool as a cucumber and in complete control, even though it looked as if she was heading straight for the pier with no intention to turn, her poker face gave me so much confidence that i just watched, saying nothing. 5 Seconds later she careered into the dock with an almighty bang, and the inevitable “crumpling plastic” sound as the front of the Jetski cracked and warped as it hit the sold wooden beams holding the dock up. It literally shook the pier. Almost immediately everyone turned around with a shocked sigh, and Tamara and the Jetski bounced backwards swinging slightly to the left. Tamara now not looking quite so cool, instead, somewhat flustered, said somthing along the lines of “no no it’s fine it’s fine.” The sound of crumbling plastic had the rest of us on the pier feeling doubtful, as we leaned forward off the pier to try and examine the front of the Jetski, which actually looked remarkably in tact, with no immediate damage visible we all breathed a sigh of relief. The next minute, the guy who had rented us the Jetski and his buddy came running down the pier towards us, shouting what was that bang, and he like us, started straining off the end of the pier to see if he could see any damage on the Jetski, as Tam shifted her weight subtly to try to turn the front of the Jetski away from him. He asked again, what was that bang, and an awkward silence began to descend, I at this point was formulating some overly complicated lie, but it was taking way to long, and the silence was growing longer, until, Tam, cool as you like, rolls this beauty off the tongue. “Ah it’s OK, it was just my water bottle falling off the bench.” In utter disbelief i daren’t even look at his reaction, but amazingly it seemed to satisfy him. Yes, that almighty bang, and quake like shaking was caused by Tam’s plastic water bottle falling 1 and a half feet from the bench to the floor of the pier. Genius.

I think we probably consumed our own weight in Rum in the 8 days we spent on that island, we had only actually planned to spend a few days there, but it was the sort of place you just couldn’t leave. Me and Tam got ourselves a whole Air Conditioned apartment for only $35 USD a night.

One of the many piers on Caye Cauker, Belize

Ben, so proud of his Coconut!

A perfectly circular rainbow after a storm in Caye Caulker

When the sun shone, it shone, when it stormed, IT STORMED! Tam enjoying her favorite past time.

Proud of yet another Coconut! Tam at the Split, Caye Caulker From left to right, Laura, Angela and Jimmy So this bar gives you unlimited Rum and a massive meal for $7 USD!

A Rose between to thorns? The girl to my left is Nele, another volunteer from Arcas who came out to meet us in Caye Caulker. Nele is Awesome, Nuff Said.

Tam, Angela and J in the Split

We left Caye Caulker, heading for Honduras, with a couple of planned stops along the way, transportation around central is a bit hit an miss, this was most definitely a miss. Tam ready to board a Chicken Bus

The six of us

Our next stop, Honduras. But that’s a different blog post. Until next time.