← If only we could hike a volcano every day!
Peru: one helpful cabbie, one mental dune buggy driver and one very lonely German woman →

Ecuador: The middle of the world

As much as we love long bus journeys we decided to fly from Costa Rica to Ecuador to save time. In Quito we met the organiser of our volunteering project who, to our amazement was there to met us on time and had all our details! Not the kind of treatment we had expected given our past experiences.

The weather was less than perfect and flip flops were no longer appropriate to the new weather conditions – torrential rain. The project coordinator, Francisco drove us to what was to be our home for the next 4 weeks, a little hostel in the centre of Quito.

The first few nights were sleepless to say the least, the Hostel which was situated between several noisy clubs was pretty basic, and our room consisted of two single beds, only one of which was habitable. Needless to say after just a few nights in the Hostel from hell we dubiously decided to take Francisco up on his offer to stay with a Spanish speaking host family – our Spanish at this point has not improved much beyond ordering a coffee.

As luck would have it, Francisco found us a place at his parent’s place. A beautiful house on the city limits. What an upgrade, our room had gone from a 1 bed flea pit to a stunning double at the top the house with lovely views and an en-suite bathroom.

Quito is a beautiful city that lies in the valley of the Andes. The altitude made small tasks extremely difficult, like walking up stairs (at least that was my excuse). It’s peculiar, you can be doing little or nothing and find yourself gasping for breath.

Can you guess where Ben’s going?

Following a couple of meetings at the volunteer center, we were ready to begin work on our Ecuadorian volunteer project, this time was at a child day care centre for street kids. They were very cute, in a nose-dribbley kind of way. It wasn’t exactly what we had expected, finding most of our day to be spent listening to kids whining “poca me pour favour” – meaning, “Push me please” as they directed us towards the swings in the playground. They could literally spends hours and hours on those swings, and heaven forbid we should stop to give our flagging muscles a rest. A fleeting rest given the inevitable “Poca me pour favour” that would immediately follow our break, a request we would have to give into if only to stop our hearts bleeding.

Some of the kids on the project in Quito

Tam, loosing the ‘Puca Me’ battle

Ben bullying people smaller than he is

Whilst in Quito we visited the middle of the world, literally. First we had a look round the ‘fake’ equator line which is actually 200 m from the actual line but I guess the government couldn’t be bothered to move it (nor admit their mistake). Next up was the real line and indigenous museum which was much more interesting. We did all kinds of experiments like watching the changing direction of water down a plug hole as we moved the bucket from one hemisphere to the other, balancing (or trying to balance) an egg, tests whereby which you could feel the different forces on your body as you stood right on the equator itself. You actual weigh less on the equator line( I was very happy here). Unexpectedly, one of the local workers took a shine to us and brought a little box from a back room, asked us to put our camera away and then lifted the lid, to reveal a shockingly detailed real shrunken head, incredibly fascinating and equally as gross.

The less exciting shrunken head we were allowed to photograph

THE MIDDLE OF THE WORLD! 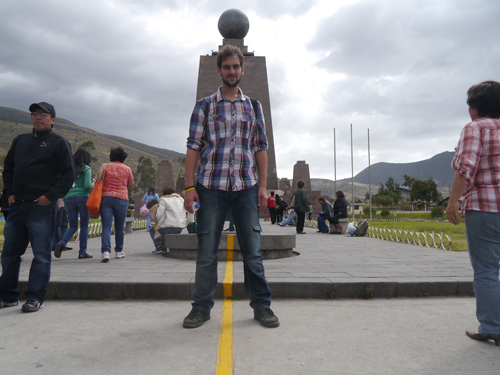 Standing on the ‘Fake’ equator line

Another view of the fake equator

A few days into our project, Ben got severe case of food poisoning, we have a sneaking suspicion it may be something to do with a rather suspicious bowl of soup he ate, one in which half way through eating he found a chickens foot. I guess some people just can’t handle their chicken feet! 😉 I don’t know exactly what happened during the 5 hours he spent locked in our posh en-suite bathroom, needless to say he came out a couple of stone lighter than when he went in. I’m pretty sure he exorcized a few demons during that night. Something else happened which relates to a particular story from our adventures at Camp America, but it’s not blog friendly, you’ll have to ask him about it in person.

Around and about in Quito

Beautiful views of the hills in Quito 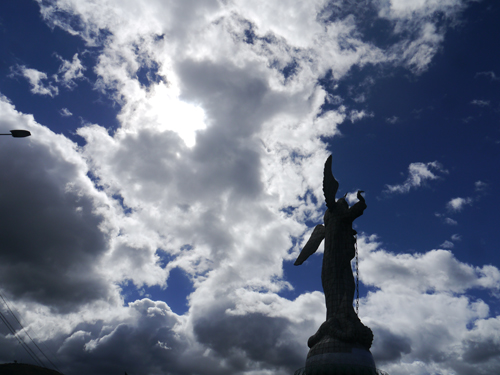 Ben with Quito in the background 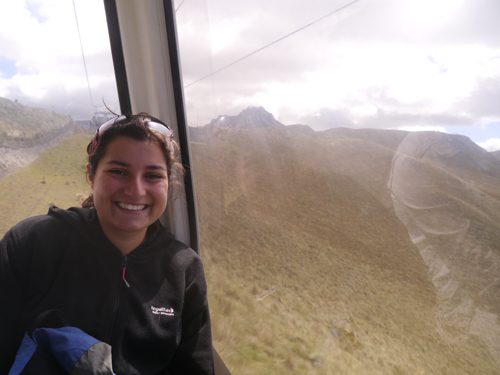 We spent the weekends visiting other local beauty spots, one of which was a real surprise, and absolutely stunning. A lagoon which now sits inside the crater of an inactive volcano, the tour was pretty straight forward, about 6 hours from Quito with a stop at a local market and a local indigenous person’s mud hut. When we got to the top of the volcano and saw the view, we were truly blown away, it’s amazing. We then hiked down inside the volcano crater to the waters edge, and took some canoes out on the lagoon, while a local man played the same 6 notes on his home made flute. Everything comes at a price it would seem, as following our playful canoeing time, we faced a grueling 2 hour hike up a near vertical slope to get to the top of the volcano and to the meal which we new awaited us at the top.

Ben in front of the Lagoon

Llamas at the Market!

Francisco and his Family – Big thank you for having us!

After 3 weeks volunteering with children, the project organizers mentioned there was an opportunity to go and stay in the Amazon Rainforest to work with animals, given our fantastic experience in Guatemala we jumped at the offer. Unfortunately, thanks to my spending a little too much time hugging and kissing children,  I contracted some child related disease and was sick the entire time in the jungle. Sickness it seems has its upside, as it got me out of doing any physical labour which included carrying rocks, sand and cement up and down the mountain (Ben is now half his former self – a combination of demon exorcizing and heavy lifting). Our room in the jungle or ‘shed’ as it became affectionately known, was in such a beautiful setting in the heart of the rainforest that you could almost forget that it had no electricity, toilet paper, meat or alcohol.

As with all rainforests sheds, this one came with its own pet toucan “Zazu” (best name ever) and a few dozen wild squirrel monkeys. Our duties included feeding and cleaning cages of parrots, monkeys, hogs and weird beaver things – I’m sure they were called Picachus (or at least it sounded like that’s what they were called – tho rest assured they weren’t cute or yellow). Getting to the cages was the most difficult part as they were in the most ridiculous places, up muddy hills, over streams and through dense forest. I’ve never seen so much mud in my life (and I’ve been to music festivals!). We learned many skills during the project, like how to mix cement without a cement mixer, how to dodge a moody toucan and where not to stand outside a dangerous monkey cage (very distressing story involving my hair and a very angry monkey, the monkey won and I now have a small bald spot :() 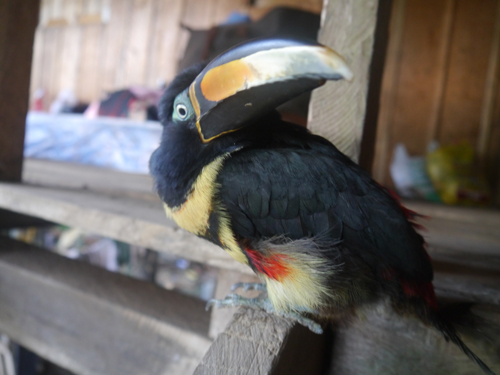 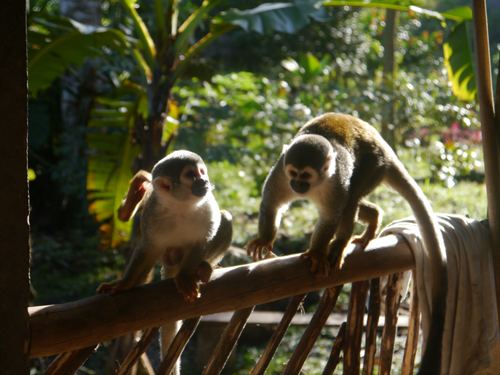 A few of the locals

Tam doing her David Attenborough thing with the camera

Ben does his best Zazu impression

Ben and the guys who run the animal centre

Tam and the guys who run the animal centre

On our last day one of the owners took us to an amazing waterfall in the heart of the amazon and we all went for a rather nippy swim. It was the perfect end to our amazon adventure, and a great way to wash of all that mud and monkey poo!

Swimming in the waterfall

Last on the Ecuadorian travel itinerary was Banos, a little place set in the mountains with a focus on adrenaline based fun. We took a day out on our 5 year anniversary to go white water rafting, Tam started the day a reluctant fraidy-cat, but finished the day a full blown adrenaline junky – white water rafting agreed with Tam! We also took some time to bathe in the natural hot-water pools, rich in minerals and boiling hot thanks to the volcanic activity below ground.

← If only we could hike a volcano every day!
Peru: one helpful cabbie, one mental dune buggy driver and one very lonely German woman →