Our next destination after Mexico was Guatemala. We took a bus out of Merida heading for Chetumal, where we had a brief overnight stopover. We had originally planned to explore Chetumal a little, but instead decided to bask in the AC room we had booked, and ordered in the best Dominoes pizza I have ever tasted. Jack Bauer helped us get off to sleep again that night.

The following day we had to get our connecting bus from Chetumal to Flores, a 9 hour journey from Mexico, through Belize and into Guatemala. The bus was tiny, and with very little legroom, I mean, this thing made an EasyJet flight seem spacious. AC was nowhere to be seen. It was a long bus ride.

Tam enjoying all that legroom

We eventually arrived at the start of the causeway which leads to the beautiful Isle of Flores, now began the all to familiar process of trying to contact the co-ordinatior of the project we were to be volunteering on. At least this time we had arrived in the middle of the day, making us feel a little safer than the arrival into Mexico. The first thing we noticed whilst we walked around looking for a wi-fi signal so we could skype one of the random Guatemalan numbers we had been given, was the sweltering heat, just lifting our bags off the bus caused us to sweat. We got in touch with someone who gave us some vague notion that a boat would arrive halfway up the causeway to pick us up – which would then take us across Lake Peten to Arcas – the wildlife rescue sanctuary that was to become our home for the next month.

We faffed around for a while, trying to figure out which side of the causeway our boat would arrive at. Then we would run back down the causeway to where there was a burger king with a wi-fi signal to use Skype to call the Guatemalan guy to confirm if we were definitely in the right spot. Then run back to where we thought the boat dock was to see if we could see the things he was talking about. We couldn’t, but luckily a boat did turn up, a tiny little thing which Arcas scribbled on the side of it with a marker pen. We were relieved to say the least. Next thing we knew, we were cruising along the beautiful Lake Peten towards another island in the middle of it that looked wild and covered by jungle. The driver switched off his engine, and proceeded to use a paddle to push the boat through the reeds, he said something to us in Spanish, I’m pretty sure it was about there being Crocodiles in the lake, but that it was still OK to go swimming. On the boat to Arcas

After a few more minutes we arrived at the foot of a steep bank, we clambered of the boat and began climbing the steps with our bags, it was a good hike to the top where the front office was situated, and by the time we got there we were absolutely pouring with sweat. We were greeted by a guy named Alejandro, a Guatemalan man who spoke perfect english and some might say he had a scottish twang to his accent. He was really welcoming, and helped Tam with her bag, we then hiked up the hill to the Casa de Voluntarios, or Volunteers house.  It was rustic, but nice – built using trees from the surrounding areas, a two story log cabin with four rooms at the top and four rooms on the bottom, each with two bunk beds and sharing a shower and toilet with the adjacent room. Only a flimsy bit of wire mesh covered the windows, no glass. There were gaps everywhere, in the walls, and the floors where the crooked trees which had been used to build it didn’t quite meet properly. We liked it immediately. We weren’t sharing our room with anyone else, so we got to spread out across the two bunk beds, we unpacked our stuff then headed down for dinner, which was at 6pm. This was to be the first of many plates full of tortillas and black beans.

The other volunteers already at Arcas, came and joined us, they all had bets on where we were from, I don’t think anyone won. We played cards with them until the power went out and we were plunged into darkness, someone flicked on a torch, at which point we were bombarded with giant moths and bugs all doing kamikaze dives into the light at the table. We all made a hasty retreat back to the volunteer house.

We were awoken at 6.15am to the sound of Greenday playing full blast from some serious speakers, we later learned this was Alejandro’s way of making sure his volunteers were never late for work, he lived in one of the rooms in the volunteers house too, so no chance of calling in sick. We followed the other volunteers down to Mammal Quarantine, where we were assigned cages and given our duties for the day. The typical Arcas day consisted of:

Lines up his target…

Would you trust this bird?

The Hawk, trained to attack as soon as his cage door was opened

He looks so innocent in this picture…

Juvenile monkey tucking into his dinner

Wild Howler Monkey and her baby

Caught a little off guard…

Feeding time for the Parrots

The Anteater – On a diet of Watermelon and blended dog biscuits… yum!

We were required to work seven days a week, with sundays being the only day we didn’t have to do chores between 9am and 11am. At 3.00pm, it was usual practice to head down to the Lake Shore, and spend a few hours swimming in the Lake and sunbathing on the docks, then with growing frequency, we would take a walk out of Arcas and along the lake front to a little old ladies house – who happened to have a fully stocked beer fridge which she would sell for 10 Quetzales a can – about £1. She became affectionately known as “Crazy Beer Lady”. 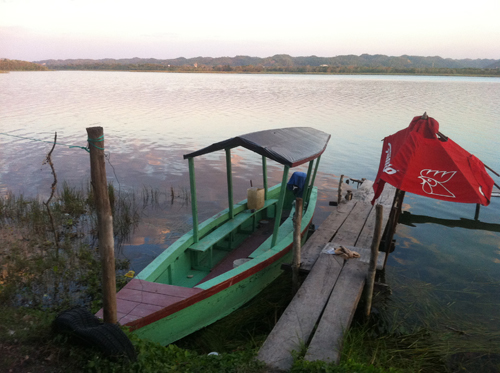 Bunkbeds in the windows of the Volunteers House