A visit to the King’s house and rockin’ it in Nashville, Tennessee.

We left New Orleans just in time, I’m not sure we could have coped with any more carnage. After a bit of a rushed start, as we had been up until 4am drinking again, and Katy had gone and booked her flight back to Texas for 11am – Stupid. Anyway, we went through the now familiar motion of driving the RV to an airport, now oh so used to the man shouting “MOVE THE VAN SIR” and reversing backwards down 7 lane motorways thanks to poorly signposted low bridges – this particular drive to New Orleans airport went better than previous airport runs, it seems we had grown wise, and decided to duck right into a service entrance just before we got to the main entrance, it worked – we got in without any problems.. unfortunately for Katy it did mean she had to leg it about half a mile to the entrance with her suitcase in tow. We said a hasty goodbye and watched her dodge the traffic as she ran for her plane. See ya Katy! x

We got on our way, plugged our required destination into the satnav, ‘You have 349 miles to Memphis Tennessee’. We’re off to Graceland, to see the king of rock and roll. We must have gotten about 40 miles in, driving through the state of Mississippi – when we saw the blue lights blaring in the wing mirror, still looking rather disheveled, and probably over the limit thanks to the weekend of binge drinking in New Orleans we sheepishly pulled over to the side of the road. A slightly overweight cop un-gracefully exited the beast of a cop car behind us, and sauntered on over to the RV, making me exit first to go and wait at the back of the RV, while he questioned Tamara separately at the front. Giving me just enough time to snap a picture of his car while he wasn’t looking.. just in case ;-).

Apparently in the 25 minutes he had been following us, I had strayed across the central line.. of course that was the reason, nothing to do with the California license plates or scary scary kids peaking out of the RV window then? I think he was just bored and couldn’t resist pulling us over.. we are kind of asking for it. A few hours later, we hit the Tennessee state line. Just another 50 or so miles until we arrived in Memphis, however – not long after we passed the state line, we saw a signpost for – the birthplace of Elvis – we swung an impromptu right off the freeway (much to the dismay of other road users) and followed the signs. 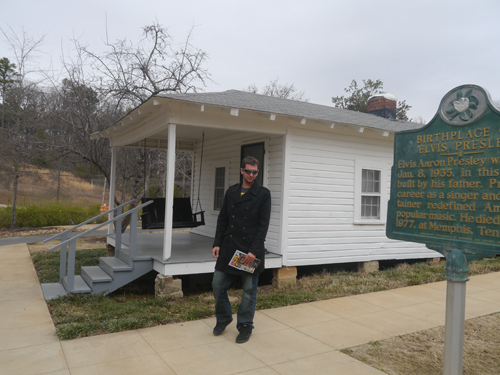 After our brief visit to Elvis’s birthplace, we got back on the road – this time heading for Graceland in Memphis, the home of the King of Rock ‘n’ Roll. 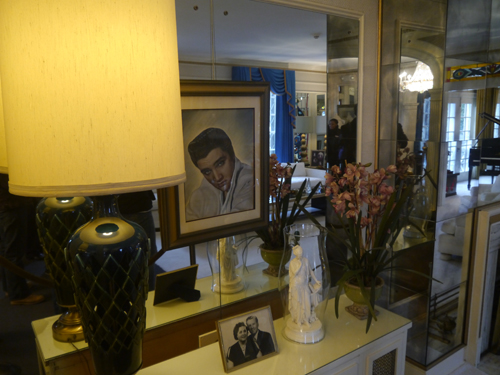 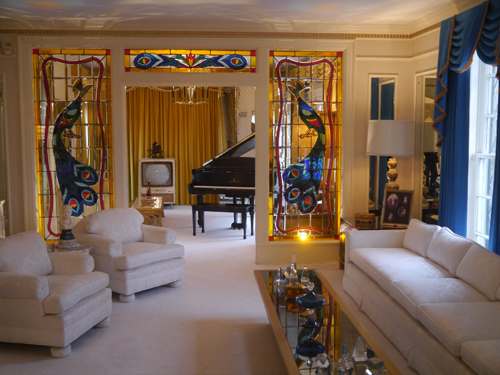 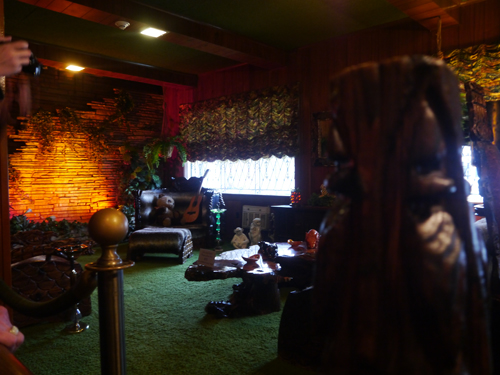 We really enjoyed Graceland, both of us expecting it to be a bit tacky and distasteful, but were both really surprised at how tastefully presented everything was, and actually how emotional the whole thing was. Highly recommended.

We spent about 4 hours at Graceland, so by the time we were out it was about 4pm, we decided to push on through to Nashville, TN where we were hooking up with friends – we plugged it into the Sat Nav who helpfully informed us that we had another 350 miles to go, thanks for that Sat Nav lady. We got on our way, within seconds of leaving the car park it begain to rain, hard. We spoke to Mikee, one of the guys we were meeting in Nashville, who informed us it was clear skies where he was, which gave enough reassurance that it would be worth continuing, thinking that we would be out of the rain any minute. How wrong we were. That was by far, the worst drive of the entire trip. We did eventually make it to Nashville, at about 9.30pm – and were greeted by our three friends – Mikee, Jay and Kyle who had fully prepped for our arrival in the form of vast quantities of Miller Lights and pizza – it was a good indication for the week ahead – we definitely weren’t going to go hungry or thirsty in Nashville. 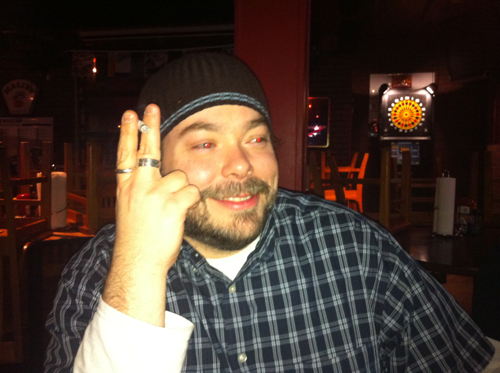 Mikee and his wonderful wife Char, were kind enough to have us stay at their house for the majority of our time in Nashville, the best part of a week – can’t thank these guys enough for all they did for us. Made us feel so welcome and drove us around to places – Love you both and can’t wait to return the favor when you get over to England! 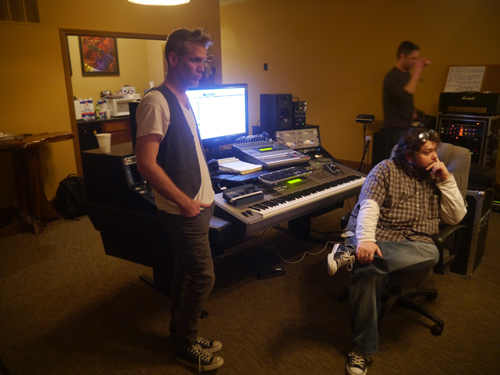 Tam in front of Broadway, Nashville

Ben after another night with Kyle, Jay, Mike and too many Millar Lights. 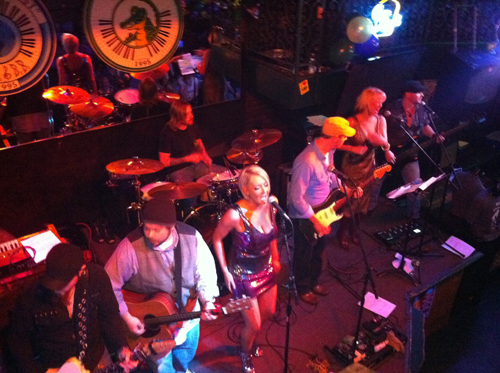 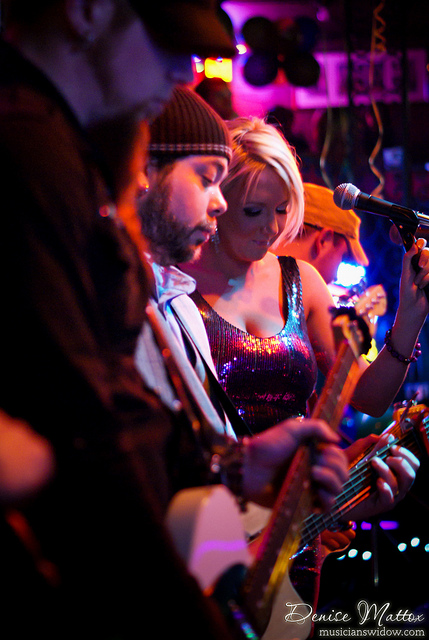 Mikee and Kassie at her album launch party 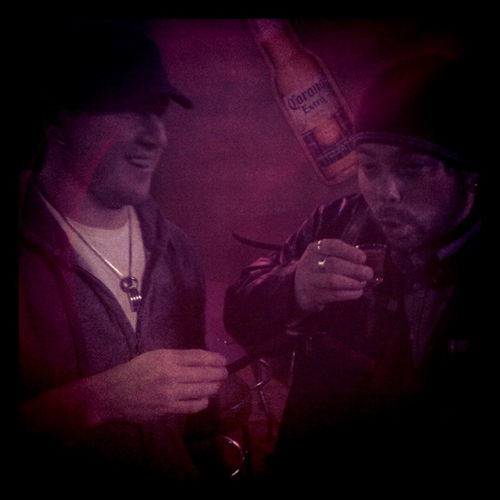 To thank Char and Mikee for their amazing hospitality, on our last night we cooked them up a Great British Roast – one that would make your mother proud! It was awesome, not to blow our own trumpets here but seriously, me and Tam cook a mean British Roast Dinner.

While at Mikees, we had the opportunity to watch the television for the first time since we got to the States.. to put it bluntly, they advertise food.. so much food and all of the time. Me and Tam by the time we left Mikee’s, had a list of all the terrible, heart attack on a plate type foods we wanted to try before we left the USA, a task that Mikee supported – at the top of the list was the Fritto Burrito.. and ton of cheese, beef, tomatoes, cheese, cheese, bread, cheese and a packet of Frittos (like Cheetoes) all smashed together into one tasty sloppy burrito. Well, we got one. Delicious.

We had an awesome time in Nashville, in particular down to Mikee and Char, Kyle and Sabrina and Jay and Britteny, who all looked after us, showed us around, had us to stay, bought us dinner – made us feel so very welcome. Thank you!

To end the post, there’s one final thing i forgot to mention, and this was probably the best thing about Nashville..

Mikee’s & Char’s dog and i think, Tamara’s soul mate, i’m still not 100% sure she doesn’t have him stuffed in her backpack.