LA, San Fransisco & a new member of the RV Family

Our America Adventure began with a slight hiccup… our flight from Fiji to LA was delayed by 4 and a half hours (locals call delays “fiji time”, gets them out of a whole load of trouble and makes it sound like a nice holiday!) Being money conscious we got to the airport 7 hours early because we were offered a free lift.  This meant we got to the airport at 4pm our flight was due to leave at 11pm and it actually left at 2:30am.  Those airport waiting area seats aint comfy!

After travelling back in time to relive another Tuesday, we landed in LA and were greeted by a huge poster of Obama welcoming us to the USA-sooo American!  After settling into our hostel we headed out for dinner and stumbled across The Grove shopping mall.  I let out a loud high pitch scream as I saw in Neon lights : “The Cheesecake Factory”.  Our eatery was decided!  An obscene amount of food later (I may need a crane to get me out of bed soon!) we hit the hay after 2 days.  We slept very well, despite the girls in our dorm checking out at 4am.

The next day we headed for the RV place.  We made few wrongs turns and met a couple of crazies but were reassured that we wouldn’t have to use public transport for a least another couple of months.

The next day we donned our “national geographic” camera, as one American put it, and hit the tourist side of LA.  First up was a drive to the Hollywood sign.  Easier to find this time as Ben is not averse to using a Sat Nav (this one is for you Danny!).  It was a little tricky to drive as we were in a huge RV and as we reached the top of the hill we were applauded for our efforts by an American on holiday from New York.  This lady also let us into to a little Hollywood gossip.  Apparently the police had found a decapitated head near the sign and they were currently looking for the limbs… yuck!

Next up on a tourist trail was the walk of fame.  I pretty sure that Frank Sinatra has more than his fair share of stars.  We had lunch at the Hard Rock (of course!) and got a call from a rock star (as you do!).  We drove out of LA to have dinner with Kyle Cook and the subject of Yoga in the morning was on agenda until the third bottle of wine reached the table.  Maybe not….

The next morning Kyle took us to the studio where Matchbox Twenty were recording their new album.  We got to hear the new single (definitely a hit) and stole some of their wifi (well, we are on a budget!)

We were back on the road again up to San Francisco (or so we thought).  We actually ended up 200 miles outside of the city on the advice of an extremely enthusiastic but equally dumb-witted American.  As we arrived at the campsite we were greeted by strong winds and rain.  Probably not the best weather to try and set up our electricity and water for the first time.  But armed with a torch, and a drenched manual we managed to get ourselves all hooked up.  Go team!   The next morning we got ready for a new addition to the family… (no Irene don’t get excited)… Steve Teece joined our RV team!

We drove to the airport and Ben tried not to get a ticket from driving around the laybys for 2 hours to avoid parking up.  We headed to our RV campsite in Pacifica (we are turning into trailer trash very quickly) and were greeted with beautiful views overlooking the Pacific Ocean.  We headed into San Francisco and decided to have dinner at a Jazz club.  After dinner, and beer with a slice of orange in?!, we hit a few bars and got a feel for the city.  We found the San Franciscos very warm and friendly and ended up chatting to one lady, who at the end of the conversation, offered to be the Godmother to our future children! 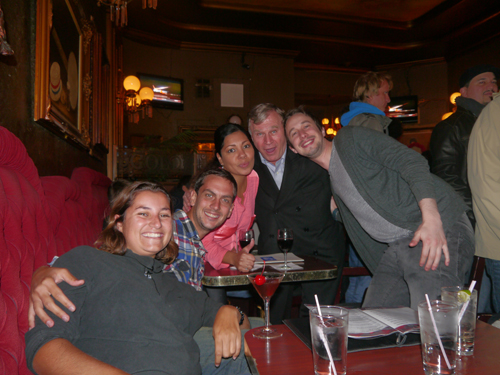 The next morning we were off to Alcatraz (which somehow we successfully managed to book online tickets for at 2 am in a drunken stupor).  The weather took a turn for the worse and Ben and I were forced to buy coats and covered shoes.   Alcatraz was amazing and so was the soup in a bread bowl we treated ourselves to later. 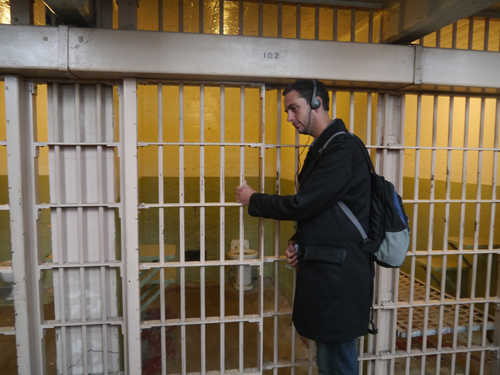 We headed to the gay district of the city on the advice of some girls Ben got chatting to at a bar the night before.  The district was quite liberal.  I can’t say anymore about this area without becoming R rated on this PG blog so I’ll leave it for your imagination!  We took a taxi to the Mission district and ended up in a tiny bar with rock and roll music and danced the night away.  The next morning (ok, afternoon lets be honest, we got in a 4am for goodness sake) we drove over the Golden Gate bridge and said goodbye to one amazing city.  Until the next time San Fran!